No wastage: Homeless get free pies too

Big Pie (and Prize) give Away 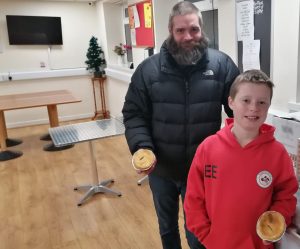 Over 250 pies were claimed and enjoyed in the Supporters Club Bar and as a special treat we had a prize draw.

It really does pay to be a member of the Supporters Club, as on top of the great food and drink deals in the Bar and top class coach travel,  we also have these draws too, where 5 lucky winners received an invite for 2 people to have a VIP tour of the Training Ground.

As there were quite a few pies left over, Vice Chair Mick Wimsey, abley helped by his sone Ethen, took the remainder to the Homeless Support Project in Leigh.

HSP is a charity organissation set up to help the homeless with food and advice, and they were extremely grateful for this donation of pies by the Wigan Athletic Supporters Club.