How Latics can bounce straight back up

It’s always takes time for the disappointment of relegation to fade away, but the appointment of Paul Cook has gone some way to improving morale at the club. The 50-year-old boss spent over four years as a player at the club, making close to 90 appearances.

Yet, more importantly, he arrives as one of the Football League’s most exciting managers. He joined Portsmouth in the summer of 2015, and took them to the League Two play-offs in his first year. Despite losing to Plymouth in the semi-final, they went one better last season, finishing as the league champions.

Not only does he boast experience in promotion – he also got promoted as boss of Chesterfield – but he also likes his teams to play good, attacking football. As such, the bookies have backed the Tics as third favourites to get promoted, but if you fancy a punt, make sure you do it well by following the matchedbets.com method.

Last season, Sheffield United ran away with League One, amassing an impressive 100 points. Two things set them apart from their rivals – their losses column and their goals scored. Billy Sharp was the main reason for the latter, finishing the season as top scorer with 30 goals. 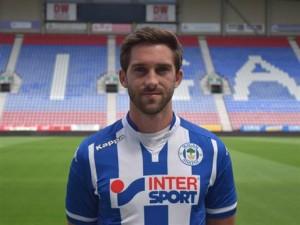 Cook has his own version of Sharp in Will Grigg. Whilst the Northern Ireland man struggled in the Championship last season – he only managed five goals – he also lacked support up top. If Cook can find a formation that provides Grigg with service, then the cult hero can definitely find the net – he proved it in League One in the 2015/16 season, scoring 35 goals from 40 matches.

Another matter is convincing the striker to stay. With the new wage structure in place, the new manager is likely to have to sell to buy, and Grigg could be a target for Championship clubs. If he does decide to leave, Cook will have to try to get the best out of Omar Bogle.

Much like Grigg, the ex-Grimbsy man struggled for form last year, managing just three goals from 12 appearances. However, he proved that he does have a goalscoring instinct at his former club, netting 19 times from 25 appearances in League Two.

Another player who Cook needs to try to keep hold of, especially if Wigan are going to make themselves hard to beat, is 2016/17 Player of the Season Dan Burn. The towering centre-back was one of the few shining lights last season, and he’ll undoubtedly be targeted by Championship clubs. If Cook can keep hold of him, not only will it be a massive boost for the team, but it’ll be a statement to other players in the squad that this season the Tics mean business.