Wigan Athletic Supporters Club are holding a mid season catch up with Paul Cook and some of his players straight after the game on Saturday where we play West Ham United in the FA Cup.

Latics are doing pretty well this season but we all have those burning questions we want to pose to the Gaffer and his team. 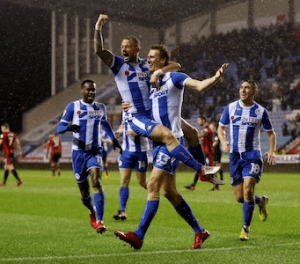 Obviously the South Stand Suite only hold a fixed amount of people so we strongly advise that you purchase tickets online via our website, or from the Supporters Bar itself before the game (as long as there are tickets left.

The Bar will be open straight after the match finishes and we expect Paul Cook and the players to be arriving anytime between 5.30pm and 6.00pm. We will get on with the questions as soon as they arrive, then the Gaffer and his team will hang around for while to sign autographs and have photos.

Tickets are priced at £2 for Members of the Wigan Athletic Supporters Club and £5 for non-members.

There will be some great Wigan Athletic related raffle prizes to win like signed balls, hospitality and some unexpected surprises too.

Tickets are on sale here and we will have them ready and waiting for you before the game, or as you arrive.

If you have any questions for Paul, any of the players or about the night itself, email us on info@wiganathleticsupportersclub.co.uk.

WIN a pair of tickets, by entering the Hospitality Competition we are running for the West Ham United game, click here for the details.

Jason Taylor, one of the Wigan Athletic SLOs (Supporters Liaison Officer),will also be at the event to chat to you if need any questions answering or wish to flag anything up that you have seen.

Jason is very approachable, so if you need to talk about any issues or indeed want to put across any ideas you may have regarding the match day experience at the DW Stadium or at away games, please ask for him if you don’t know him already.