For the 2008-2009 season Wigan Athletic have produced a new badge based on an old fans’ favourite.

However, the first badge used by the club was the full arms of the County Borough Council of Wigan which were granted on the 28th April 1922.  It is certainly a very privileged coat of arms, as few if any coats bear so many symbols of royal favour.

ARMS: Gules a Castle with three towers Argent surmounted by a Crown composed of Fleur de Lis Or.

CREST: On a Wreath of the Colours in front of a King’s Head affrontee couped below the shoulders proper vested Gules crowned and crined Or a Lion couchant guardant Or.

SUPPORTERS: On either side a Lion Or holding in the exterior paw a Branch of Mountain Ash proper. 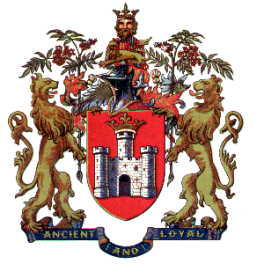 The castle is derived from the towered of castled gateway, that appears on the town’s earliest seal, dating from the 12th century.  The crown of fleurs-de-lis in the shield approximates to the type worn by Plantagenet kings.

The king’s head represents no particular king, but from Wigan’s point of view it seems to symbolise especially Henry I, whose likeness it is thought appears above the gateway in the above mentioned seal.

The Royal lion, again, marks another important period in Wigan’s history. Edward III, by charter of 1350, granted Wigan the right to use a royal seal known as the “King’s Recognaisance Seal”, on which was figured the King’s head and the royal lion.

The branches of mountain ash, known in northern dialects as the Wiggin or Wigan tree, form a rebus (a fancy name for a pun) on the name of the town. The wiggin tree, has tradition behind it, as it is a prominent feature of several of the town’s medieval seals.

The motto is in keeping with arms, with its many symbols of antiquity and royal favour.

These arms are now carried as the club badge of Wigan Warriors rugby league team who of course share the DW Stadium with Latics (the ground owners).  As a result we have a perhaps unique situation of Latics being, to my knowledge, the only club in the country who play at a stadium which carries prominently both their first and current badges.

Betting tips for Wigan Athletic can be found on OmegaTipsters site, and there are some real fans prepared to share some great tips.

Around the time Latics gained League status they started using another badge, one which is still much favoured by the fans.  Known by all and sundry as the “Tree and crown” badge it displays two of the elements of the first badge – the crown of fleur de lis of the Plantagenets, and the wiggin tree.  The whole badge is surrounded by the club’s name.  It is a badge that is simple in design, but carries with it an older tradition.  A fine piece of design indeed.

However, for reasons best known to the club they changed in 1989 to using the arms of the Wigan Metropolitan Borough Council.  Fine and heraldic arms, but lacking the simple impact of the “Tree and Crown” badge.  Well, that’s my opinion anyway.

ARMS: Lozengy Or and Sable each Lozenge Or charged with a Rose Gules barbed and seeded proper on a Chief Sable a Lion couchant guardant Or.

CREST: On a Wreath of the Colours in front of a Mountain Ash (Wiggin Tree) fructed proper a Castle triple towered Argent the centre tower ensigned by an Ancient Crown Or.

SUPPORTERS: On the dexter side a Lion crowned with an Ancient Crown Or and on the sinister side a Sparrowhawk close proper belled Or the whole upon a Compartment representing a Grassy Mount proper.

14 previous districts merged to form Wigan MBC, and the arms provide a composite of many of the distinguishing features of the old District Council arms.

The black diamonds (called lozenges), like those in the arms of the Atherton UDC, the Golborne UDC and the Hindley UDC, allude to coal mining. The red roses refer to the County of Lancashire, and also featured in the arms of Golborne and Hindley. The gold lion couchant (ie having a lie down) is taken from the crest of the County Borough of Wigan and features in one of the ancient seals of that borough.

The crowned castle is taken from the arms of the County Borough of Wigan, the castle and crown are also from one of the borough’s mediaeval seals – all of which we’ve described above. The mountain ash or Wiggin Tree is chosen as a pun on the name of the district. Branches of this tree are borne by the former Wigan supporters and the tree features in several of the borough’s mediaeval seals. 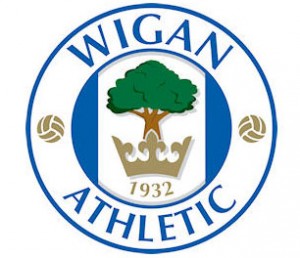 For the 2008-2009 season however, their fourth in the Premier League, Latics went back to the much-loved Tree and Crown badge.

Slightly sharper than previously and including more modern design elements, as well as the date of foundation of the club, 1932.

A fine piece of design, and a good example of the club listening to the fans.