What are the Latics’ survival chances now?

In any of the last three seasons 45 points would have been enough for Wigan to survive in the Championship. Not this season though.

Nottingham Forest have already accumulated that number of points to sit just above the drop zone, leaving Blackburn and Wigan with an uphill task if they are to avoid joining rock bottom Rotherham in the third tier of English football.

For all the joy of the Brighton fans and players on the south coast last Easter Monday there came the gathering realisation amongst the small band of Latics travellers that the 2-1 defeat was another nail in their coffin.

With three games to go, they are five points adrift of safety.

Most of the pre-season football tips had the Latics down for a season of struggle following last year’s promotion from League One, but few pundits would’ve predicted things would have been quite so bad.

They are now on their third manager – Graham Barrow, after Gary Caldwell and then Warren Joyce lost their jobs – and look nailed on to return from whence they came.

The 13 players Joyce brought into the club during the January transfer window did not galvanise the squad at all, and Barrow has been left to pick up the pieces. 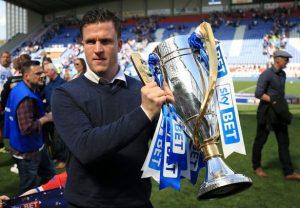 Time is not on his side. Realistically, Wigan now need to win all three of their remaining games to stay up and it’s hard to reason how that could possibly happen. That said if you’re feeling especially brave, these free bets at Free Super Tips may be worth checking before placing down a wager on our survival.

Like his two predecessors, Barrow is still searching for the magic formula and the side have won just twice in his six-game tenure. Both those wins came by a 3-2 scoreline with one of them against the only team below them in the table – Rotherham.

It could be as good as over on Saturday if Wigan lose at home to Cardiff and Forest pick up a point against promotion chasers Reading.

Wigan won 1-0 down in the Welsh capital earlier in the season and come up against a Cardiff side that hasn’t won away from home in five games since mid-February so all is not lost just yet.

Should Wigan get the result they’re after and keep their survival hopes alive beyond the weekend, then they face games against Reading away and Leeds at home.

Whilst Reading are flying high in third and bounced back impressively from their 7-1 mauling at the hands of Norwich with wins over Aston Vila and Rotherham, they are certainly not unbeatable.

True enough, the Royals handed out a 3-0 lesson to the Latics back in November, but that was Joyce’s first game in charge and before his players had found their feet and adapted to new tactics, they were 2-0 down inside the first five minutes, whilst the other goal came from the penalty spot.

As for the Leeds game at the DW Stadium, a lot could depend on whether the visitors have anything left to play for. A miserable 1-0 home loss to Wolves left Leeds on the outside looking in at the play-offs. A huge army of travelling fans will cross the Pennines if promotion is still on the table and that will obviously be counter-productive to Wigan’s own chances of success.

Wigan played well to get a 1-1 draw at Elland Road back in October although it did take a stoppage time equaliser from Shaun MacDonald to secure only their second point on the road at that point of the campaign.